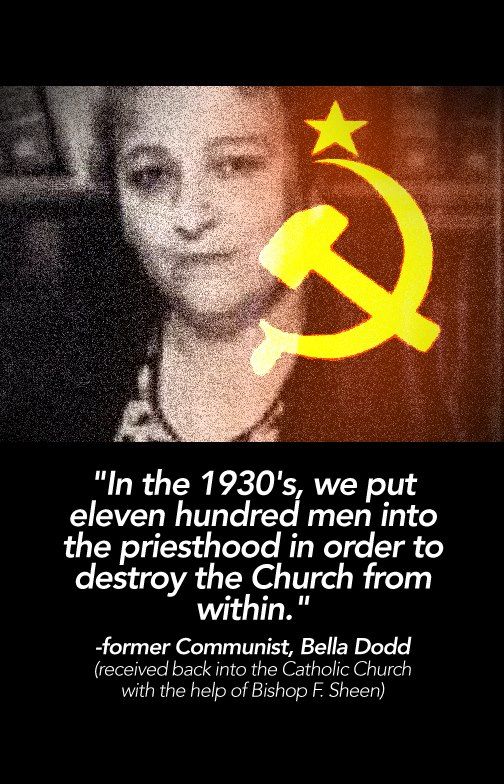 The Freemasons are a secret society in which has plotted against the Catholic Church since it came into existence in the 14th – 15th century. The Freemasons promote heresies such as the denial of revealed dogma, naturalism, liberation theology, rationalism, universalism etc. Pope Pius XII taught: “..the roots of modern apostasy lay in scientific atheism, dialectical materialism, rationalism, illuminism, laicism, and Freemasonry; which is the mother of them all…” (May 23, 1958 A.D.)

Countless times throughout history, the Freemasons have tried to destroy the church from outside by persecuting it with force; examples being the French Revolution and the Cristero War. (Note: The newly Masonic government of Mexico was funded by the USA to destroy the Church in the country in order to establish a secular state). Since these persecutions did not work in regards to destroying the church (with the Cristero war coming later), Pope Leo XIII received a letter titled the “Alta Vendita” by the highest ranking Masonic lodge of Italy, warning that they would attack the Church from within by bribing clerics to spread error. (Even hiring their own members to become clerics to continue spreading heresy from inside the church).

The document also mentions how they even have a plot to abuse the Papal office by pushing for a Pope that will do what they desire; spread error from the top! “That which we ought to demand, that which we should seek and expect, as the Jews expected the Messiah, is a Pope according to our wants.” (section XIX, 1st half of the 19th century — emphasis added). You can imagine the fear that was installed into poor Pope Leo XIII, which explains why he warned against freemasonry more than any other Pope: Custodi di Quella Fede & Humanum Genus being only a couple examples.

Hence, the Catholic Church has anathematized the society, and declared that Catholics in which join the society are de facto excommunicated. Canon 1917, 2335: “Those who join a Masonic sect or other societies of the same sort, which plot against the Church or against legitimate civil authority, incur ipso facto an excommunication simply reserved to the Holy See”. In the 17th century, before Freemasonry was even publicly known to the world since its first lodges were established in the 18th century in London; Our Lady of Good Success in Ecuador warned that the Freemasons would attack the Sacrament of Marriage in the Catholic Church. She is called the “Queen of Prophets” for a reason!

“As for the Sacrament of Matrimony, which symbolises the union of Christ with His Church, it will be attacked and deeply profaned. Freemasonry, which will then be in power, will enact iniquitous laws with the aim of doing away with this Sacrament, making it easy for everyone to live in sin and encouraging the procreation of illegitimate children born without the blessing of the Church.” (June 21st, 1610). Even though this is the unfortunate reality of what is going on in the Church, and in the world, we should not be afraid and loose hope. Instead, we should simply pray for the sanctification of our own souls, pray for our clerics, stay in the state of grace, stay close to the sacraments, learn our faith, and preserve Catholic orthodoxy. Remember; God is in charge. God bless.